The Return of the Wing Chun Bears!


From my understanding in Aikido, those who wears the Hakama (the long skirt looking uniform) is actually at a pretty high level, probably the equivalent of a blackbelt in karate.

Aikido practitioners should be able to verify to see if the adult isn't just allowing her to throw him around. Look closely you can see her footing and energy actually drives the adult to the floor. (non-believers gonna hate)

But it doesn't really matter because at the end of it she look so adorably cute when she was being fling around by the adult at the second half of the video.

*warning*
'not recommended for untrained people to throw their siblings/daughters around without the propertraining'
Posted by Hawke at 02:55 No comments:

I have a feeling the founder of Wing Chun might have seen bears fight. But because it looked too masculine and aggressive maybe she decided not to say the style derives from a burly bear. Or people may not try to court her back in the day..........It's just my philosophical theory is all....
Posted by Hawke at 02:03 No comments:

This is probably old news, but interesting to many who might have missed the news where last April, Hong Kong Air have announced they are implementing Wing Chun Training as their compulsory training in addition to Cabin services. (honestly i think the management might have saw that Donnie Yen movie last year) 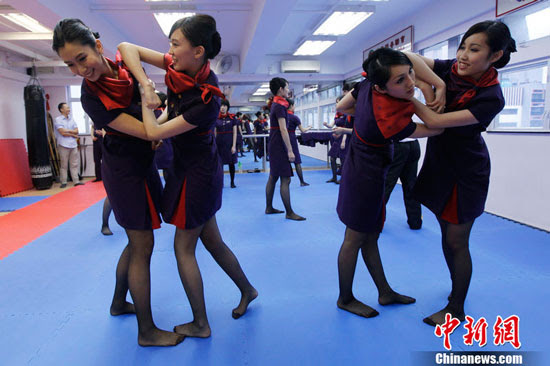 It was reported that cabin crew have to deal with disruptive passengers, like drunkards and troublemakers.....(or triads!) 3 times a week. (not good PR to announce such thing im sure :P)
Although it may seem like a wild fanboy fantasy where stewardess knows kung fu are usually depicts in Japanese cartoon anime, Wing Chun practioners believed it is believed that its well-suited for cabin crew to use in a small confined space.
The Deputy  General Manager of Corporate Communications in HK quotes,
"One of the passengers was sick but he was probably drunk and felt unwell -- the crew member attended to him and she realised her fitness was helping her especially because the guy was quite heavy,"
"Normally, a female cabin crew can't handle a fat guy, especially if he's drunk, but because of the training, she can handle it quite easily."
Posted by Hawke at 01:27 No comments:

We all heard of, "my daddy is stronger than your daddy" or "Chuck Norris can beat Sean Claude Van Damme!"
How bout we try, "my grandmother can kick your mommy, daddy & Chuck Norris combine!"
The trailer is an up & coming Documentary call "Be Strong, Be Gentle, Be Beautiful", which profiles the life of 98-year-old judo master Keiko Fukuda. Her destiny down the path of judo was set two generations before her, and in 1934 (at age 21) she begantraining (this was during the final period of the Samurai). Keiko is also the last living member of Kano, the founder of judo. She gave up marriage, family, and Japanese citizenship to pursue a life practicing judo. - She's the only woman in the world to receive a 10th-degree black belt.
A woman that who deserve much recognition for her accomplishment as well as influence for the world of Martial Arts for Women. Once again proving, Age & gender does not limit for someone to follow the path of a Martial arts.
I have an epiphany.  Who wish to see Baby Bruce Lee go against Master Keiko Fukuda? i do!
Posted by Hawke at 01:04 No comments:

Spider man eat your heart out, The World Police Firefighters Games of 2011just happened recently in New York. People from all over the world compete and celebrate the heroism of world's public servant risking their lives every single day.

9/11 10th anniversary is just around the corner, they held such competition in NYC also in commemoration of the faithful event that changed America and the world.

Imagine how different Hollywood drama will be like if all rescuers are like these guys. Infact...can you all even imagine firefighters wearing tights with their underwear out like superman? "Help! save me Fireman!" 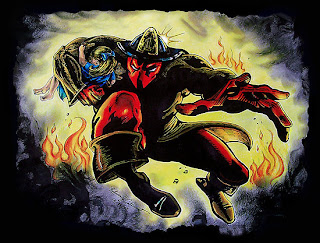